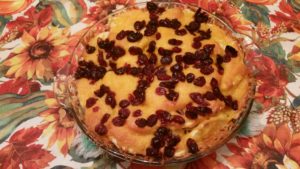 In the bottom of a baking dish place a layer of bacon.

Cover the bacon with 2 layers of sliced apples.

Continue the layers ending with a layer of cheese.

Top with craisins for a festive look.

Bake at 400 for 30 minutes or until the apples are soft and the cheese is melted. 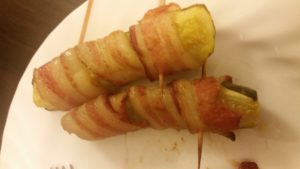 Preheat the oven to 425 degrees

Use paper towels to dry your dill pickle spears.

Start on one end of the pickle and completely wrap the pickle spear with your slice of bacon.

Use a toothpick to secure the end of your bacon to the pickle spear so it does not come unwrapped.

Place on a baking sheet and put in the oven at 425 degrees for 15 to 20 minutes, or until the bacon is crisp.

Three generations of Stoltzfus women are all living under the same roof. At twenty-five, Naomi has never been married, and both her mother, Barbara, and her grandmother, Ruth, have recently been widowed. Each nursing broken or lonely hearts, they also each have potential suitors. When a storm on Christmas Eve forces the three couples to take shelter in the basement of the Stotlzfus homestead, secrets are revealed, hearts are opened, and all three potential grooms drop to their knees for very different reasons—a proposal, a prayer, and an epiphany.

The Christmas Cat by Amy Clipston

Emma Bontrager is spending her first Christmas alone after her husband of 45 years, Henry, passed away in July. Although the Amish don’t normally allow animals in their homes, a big, fat, orange barn cat keeps coming into Emma’s house. She shoos the cat away, but it continues to appear in her house, settling on Henry’s favorite wingchair. But the cat isn’t the only Christmas visitor: a group of young people help bring the Christmas spirit to Emma, reminding her that love and hope abide.

As a young man enjoying his rumspringa, David Byler gave his heart to an Englisch girl, but he eventually realized he couldn’t give up his Plain faith and family for her, so he let her go. He’s found a new love in his Bee County Plain community, Molly Shrock. Molly has been patient, waiting for the man she loves to love her back. Just as he is ready to propose, David makes a startling discovery: Bobbie McGregor, his Englisch love, is back. Will Molly’s prayers for a Christmas love be answered?

Home for Christmas by Ruth Reid

When a misdirected GPS sends Ellie Whetstone to the wrong address, she inadvertently finds herself breaking into the home of Amish man, Ezra Mast. Ellie hopes to fix up the house left by her aenti and sell it quickly, but a series of run-ins with Ezra and his young daughter have her questioning whether a hasty sale is the right move. Could this new place with its slower pace be the right home for Ellie?

Four stories that are a quick read but have a surprising amount of substance. The characters were all well thought out and the plots were amazing. Each of the stories is set in a different part of the country, but they all revolve around some kind of romance, Christmas, and the Amish people. Included with Novella is a short glossary of terms for a handful of words that might not be easily understood, and a group of discussion questions at the end. My mom also lived this book. I would give it 5 stars

Disclosure of Material Connection: I received this book free from the publisher through the BookLook Bloggers book review bloggers program. I was not required to write a positive review. The opinions I have expressed are my own. I am disclosing this in accordance with the Federal Trade Commission’s 16 CFR, Part 255: “Guides Concerning the Use of Endorsements and Testimonials in Advertising.” 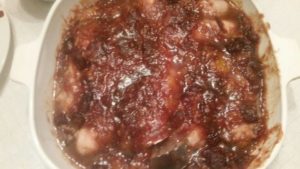 Mix the cranberry sauce, Lipton soup mix and oranges in a bowl. Make sure all the ingredients are thoroughly blended.
Stir in the garlic and honey.
Sift in the cornmeal to thicken the mixture.
Pour a little of the mixture on the bottom of a baking dish, just enough to coat the bottom.
Place your chicken in the dish, spread the rest of the mixture over the chicken, coating it eavenly.
Put in preheated oven at 250 for 60 minutes or until the chicken is cooked all the way through.
Serve with rice.