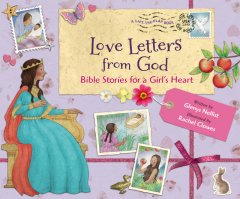 In this heart-warming picture book designed for girls, author Glenys Nellist tells the inspiring stories of incredible women in the Bible. With beautiful illustrations by Rachel Clowes and sweet lift-the-flap envelopes, each story delivers a special message for children to open as they read their own personal love letters from God. Full of warmth and love, this picture book will fill girls’ hearts with the wonder of the Lord. The stories of Eve, Miriam, Esther, Mary, and many more will delight children and remind them of the bond they can share with God, just like the women of the Bible.

This book for girls has 14 stories about women of faith and how God loved and protected them.  Also included with each story is a note you can open that is a love letter from God to you.  This book will inspire your daughter with these stories of faith.  Each story is beautifully illustrated by  Rachel Clowes.  This book is a great gift for your daughter, granddaughter or niece I give it 5 stars.

Disclosure of Material Connection: I received this book free from the publisher through the BookLook Bloggers book review bloggers program. I was not required to write a positive review. The opinions I have expressed are my own. I am disclosing this in accordance with the Federal Trade Commission’s 16 CFR, Part 255: “Guides Concerning the Use of Endorsements and Testimonials in Advertising.” 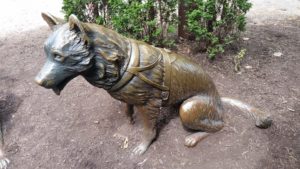 You have most likely heard about Balto the dog that saved the town of Nome, Alaska from an epidemic. In freezing and whiteout conditions, Balto delivered the serum. Using his sense of smell he found the right path to Nome.

In 1925 diphtheria was ravaging the town of Nome. They had serum, but it was expired. Rather than risking the expired serum the town doctor radioed for more serum. Because of the extreme cold and weather no train or plane could make the trip so sled dogs were used to transport the serum.

Dr. Welch had requested 1 million units of serum but they were not available.  However 300,000 units were found at the Anchorage Railroad Hospital and they were sent to Nenana for transport to Nome. The teams ran 674 miles across Alaska from Nenana to Nome.  20 mushers and over 150 dogs participated in the “Race for Mercy”.  The trip took five days to complete.

The team that transported the serum for the last 55 miles was Gunnar Kassen and his team of dogs led by Balto.  When Kassen reached Nome he became a celebrity, but he insisted that just as much credit be given to his lead dog Balto.  But there were others who made the run that did not get all the glory.

Another musher was Leonhard Seppala with 20 dogs, his lead dog was named Togo.  Seppala was supposed to pick up the serum in Shaktoolik and deliver it to Nome.  He raced 91 miles into the oncoming storm to pick up the serum. To save time he took a dangerous shortcut across the Norton Sound. (Even today the Iditarod does not cross the sound as it is too dangerous.) The temperature fell as he traveled, it dropped to -34° F but the gale force winds lowered the wind chill to -84° F. Racing the storm he made it to the other side a little over 100 miles outside of Shaktoolik.

Believing he had over 100 miles to go still to reach Shaktoolik, Seppala pressed on.   He spotted another team whose dogs were tangled from an encounter with a reindeer, but he decided not to stop as he needed to pick up the serum.  Suddenly he heard a shout, “The serum. The serum. I have it here.”  It was fellow musher Henry Ivanhoff who was supposed to deliver the serum to Seppala.  He informed Seppala of the fact that the epidemic had worsened, that was why they added more mushers.

With the situation being so desperate, Seppala decided to return across the sound. Cracking ice and drifting floes made this a risky move as Seppala could wind up stranded unable to reach the shore. Whiteouts of blinding snow left Seppala unable to see and wound up relying on Togo to find the way with his nose. But Seppala had faith in Togo to lead them there safely.

On a previous trip across the sound, the ice cracked and left a gap too wide for the sled to cross.  Racing across the ice, somehow Togo sensed the break and stopped short preventing disaster.  But it was too late as the ice had started drifting and there was no way off the ice floe. For over twelve hours they drifted across the water until the ice drifted near another floe that was still connected with land.

But still there was a gap of water over five feet wide, Seppala was unable to jump it or cross with the sled.  The had come so close but still they were stranded.  But Seppala had a plan, he tied a lead around Togo and heaved him across the gap on to the other ice floe.  Togo began pulling on the lead, bringing the ice floe closer to the one he was on.  But then the lead snapped and the end fell into the water, the floes were still too far apart.

But all hope was not yet lost, for Togo leapt in to the water and swam to the broken end of the lead.  Grabbing the end of the lead with his mouth, Togo once again began pulling.  Slowly the pieces of ice began coming together, little by little until finally they were close enough for Seppala to escape.  He drove his team and sled across the gap and headed for land.  Togo had saved the day.

This time though they could not afford such a delay, the serum had to get to Nome.  Through the storm they raced across the ice with Togo leading the way.  Fortune smiled upon them and they reached the roadhouse at Isaac’s Point by eight p.m.

Exhausted they rested until two a.m. when they set out across the sound once again.  The storm had increased and the ice was cracking, but Togo lead them straight and true.  The reached Little McKinley Mountain by daylight where Seppala turned to see that the ice they had crossed was now all cracked apart and drifting.  They had barely made it safely to shore.

Climbing to 5,000 feet they crossed the mountain, descending they saw their destination ahead.  Reaching the bottom of the mountain they headed to the roadhouse at Golvin.  There Seppala handed the serum to the next musher and fresh team of dogs.

By the time Seppala finally pulled into Nome, the newspapers were proclaiming Kassen and Balto as the heroes of the race for mercy.  Featuring one team was more exciting than the tedious list of many mushers.  Kassen and Balto even starred in a film about the run and toured the United States.

Togo however eventually got his due.  He was flown to Maine where he was bred and in 1930 became the father of the modern Siberian Husky breed. (Balto was not bred as he was neutered as pup, since he was considered an inferior specimen).  Also in 1997 the Cleveland Metroparks Zoo added statues of Balto and Togo outside of their wild wolf exhibit.