Place a biscuit on wax paper and use a roller to roll it out flat in an even circle.

Spread pizza sauce on the circle leaving about an inch around the edges.

Place your pizza toppings on ½ of the dough.

Flip the top half of the dough over the bottom half and pinch the edges together.

Put the calzones in the oven and bake for 17 – 20 minutes, until the crust is a light golden brown. 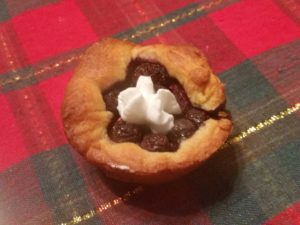 Open the tube of crescent rolls and flatten each roll into a round circle.

Place one roll in each spot of the muffin tin, pressing the roll against the sides to form a cup.

Place your fruit inside the cup formed by the rolls in the tray.

Place your tray in the oven and bake for 18 – 20 minutes, until the dough is a light flaky golden brown.

Remove from oven and cool.

It was a sad time in the Mouse house, for Mr. Mouse was very sick.  Day after day he lay there unable to get out of bed, growing weaker and weaker.  Mrs. Mouse was busy taking care of Mr. Mouse, trying to help him get better.

Poor little Samuel Mouse, his mom was always taking care of his sick dad and had no time for him.  Samuel knew that his dad was unable to go out and get food for their family, and he needed food to get better. This made Samuel so sad he hardly ate anything himself so his dad would have more food to eat and get well.

Every day Samuel would take most of his dinner up to his dad and sit there hoping he would eat. But Mr. Mouse would not eat and Samuel would put his food back in the cupboard so Mr. Mouse would have it when he needed it.  Poor little Samuel grew thinner each day from not eating.  Why he became so thin he was almost invisible.

One sunny day Gladly Bear and Suzanne Bear came over to visit.  When they saw how thin Samuel Mouse was they were upset and asked him if he was okay.  But Samuel was embarrassed and did not want to say anything to Gladly or Suzanne.

Gladly and Suzanne saw that there were not as many berries on the bottom of the bushes, so when Samuel was not looking they would drop extra berries on the ground for him. But Samuel saw them dropping the berries out of the corner of his eyes and worked harder gathering all the bright berries he could find. Soon his bag was bursting to the seams with huckleberries, Gladly and Suzanne also filled their bags with the tasty treats.

Gladly looked at the other two and told them, “Why we have had a good day, my bag full of delicious huckleberries.”

Suzanne, not to be outdone by her big brother chimed in, “My bag is fuller!”

“Well my bag is the fullest”, chimed in Samuel.  “And when I get home I am gonna take some of these up to my daddy.  I bet he will love them.”

They rushed back to the Mouse house with their bountiful harvest of berries, and when they arrived Samuel dashed upstairs to see his dad.  As he entered his room, Samuel handed the berries to his mother; she squeezed the juice out of a couple of them into a cup.

Tilting the cup by Mr. Mouse’s face, she urged him to drink a sip.  Mr. Mouse opened his mouth and drank a drop of the huckleberry juice.  Tasting the mouthwatering goodness of the juice, Mr. Mouse took another sip.  Soon he was draining the cup of the juicy delight.

Mr. Mouse drank some of the juice every day and soon he chewing on whole berries.  Gladly and his other friends gathered more berries for the Mouse family, and their parents brought over other food for them.

By Sunday morning, Mr. Mouse was able to get out of bed.  Weakly he strode down the aisle and took his seat.  Resting he leaned back against the pew, proudly his wife and son sat next to him.  Samuel beamed happily at his friends, thankful for the kindness Gladly and Suzanne had shown him.

Spotting Miss Rosie the Wise Old Owl, he waved.  Smiling she came over and gave Samuel a quick little hug.  Samuel told her about what Gladly and Suzanne did while they were picking berries.

When it came time for the children’s Bible hour, Miss Rosie stood and spoke about what Gladly and Suzanne had done.  “They were true friends to Samuel”, she said. “They helped him in his time of need, in fact this reminds of a story I read in the Bible.  This story is about a girl named Ruth and her mother in law Naomi.

While they were traveling on a long journey through the land of Moab, Naomi’s husband died. Naomi and her two sons continued to live in Moab. Both of Naomi’s sons got married – one to a woman named Ruth, and the other to a woman named Orpah. For ten years they all lived together in Moab. Eventually, both men died, leaving Naomi, Ruth, and Orpah as widows.

But Ruth and Orpah both said, “We will go with you.”

Again Naomi begged them to go back to their own homes saying “I am old and have no hope of getting married.  Even if I did have sons again would you wait that long for them to grow up?”

Orpah kissed Naomi and left but Ruth clung to her. Naomi asked Ruth to go but Ruth replied, “Please do not ask me to leave! Wherever you go, I will follow, and where you stay, I will stay, and your people will be my people, and your God will be my God.” And she added, “Where you die, I will die, and that is where I will be buried. May God let us be together until we both die.”

When Naomi realized that Ruth would not change her mind, she accepted, and they both traveled to Bethlehem together. They arrived at the beginning of the barley harvest and they stayed just outside the city near the home of a man named Boaz.

Now Ruth told Naomi that she wanted to go out to the fields and gather the extra grain that was left behind. So each day, Ruth went out to the fields of Boaz. Now Boaz was a kind man, and he told his reapers when he saw Ruth gathering, “When you reap the good grain, let some of it fall to the ground for the poor to gather.” He also asked of them, “Who is this woman? Does she have a husband?”

The reapers answered, “She is a Moabite woman who came back with Naomi.”

So Moab told Ruth, “Don’t go to another field but stay close to my women.  When you are thirsty, get your water from the jugs that my men have drawn.”

Ruth fell on her face and said, “Why are you so kind to me, I am but a foreigner.”

He answered, “I have heard what kindness you have shown towards your mother-in-law since your husband died, and how you stayed with her instead of going back to your home. Therefore may the Lord bless you and give you a great reward.”

She thanked him for his kindness to her. At the mealtime Boaz invited her to join him in the meal and she ate until she was full.  Afterwards she returned to the fields to gather more grain. But Boaz told his reapers to let her gather and to also pull out extra bundles of grain for her to gather.

She continued to gather until the evening and then beat out what she had gathered.  She had gathered about a bushel of barley from the fields.  She gathered it together and took it back to Naomi along with the food she had left over from the meal.  Naomi asked her where she had gathered that day.

Ruth answered, “In the fields of Boaz.”

Naomi praised God saying, “Blessed is the Lord who has not left us!” Then she explained to Ruth that Boaz was a close relative of hers.

Ruth continued telling Naomi, “He also said to me, ‘You shall keep close by my young men until they have finished all my harvest.'” Naomi told Ruth, “It is good, my daughter that you go out with his young women, for in another field might be attacked.”

So Ruth kept close to the young women of Boaz, gathering until the end of the barley and wheat harvests.  Ruth continued living with Naomi. Eventually Ruth married Boaz and she became the great-grandmother of King David.”

Miss Rosie found this story in the book of Ruth